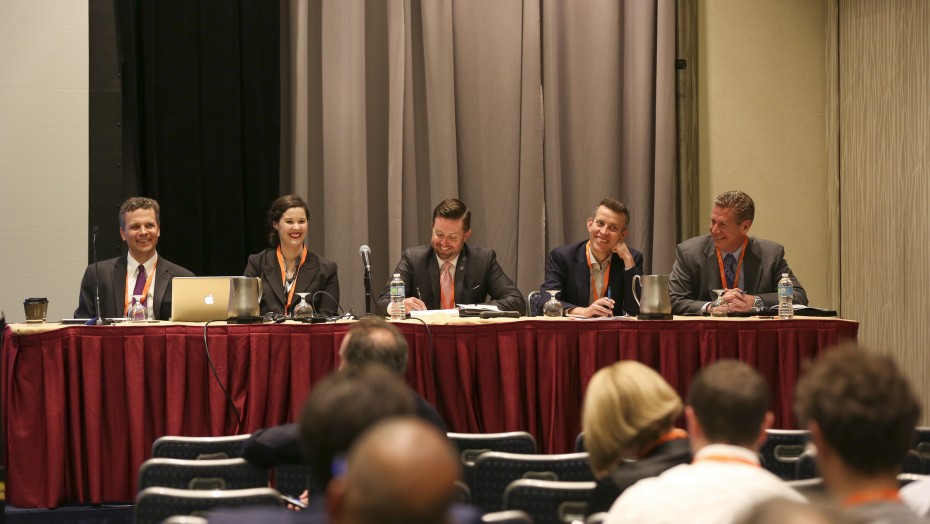 We had a great time at the Data Coalition’s DATA Act Summit in Washington, DC on May 26.

The Summit brings leaders from government, the private sector and civil society together to focus on transforming federal spending information into easily accessible, open data. It was the third summit since President Obama signed the Digital Accountability and Transparency Act (DATA Act) after it was passed unanimously by Congress in 2014. Key issues at this year’s summit were how to use open data for better oversight of federal spending, linking spending data to performance data, and the need for non-proprietary award identifiers for companies in federal spending records.

Behind these lies a larger question: how do we ensure the government’s new tools for publishing public spending data meet users needs? The U.S. Department of the Treasury’s Kaitlin Devine described the open, iterative, and user-centric design process that her office is using to develop the new version of USAspending.gov, the federal government’s website for monitoring all public spending, including contracts. Anyone can view and comment on the beta version of the site, including how contract awards are presented. Both the code and the development team’s task list are freely available. This open, agile process, in which anyone can give input, is an excellent model for developing government systems.

Access to U.S. contracting data is a key component in federal spending. Here are our three key suggestions based on what we learned at the Summit:

Participants at the summit are motivated by giving businesses and citizens the ability to see “who, what, where, when, and how” the federal government spends its money. When it comes to the U.S. contracting tools, we’ve found that information on the “what” — ie. what goods or services are being procured — is weak or missing. For example, the new USAspending.gov site will not actually show a detailed description of what the federal government is buying under transactions. It may be possible to link to solicitation information in other open datasets, such as FedBizOpps which is the public website for all contracting opportunities. However, this is not guaranteed because solicitation numbers (which link to documentation for the orginal solicitation within FedBizOpps) are often missing both on USAspending.gov and in the government’s central repository for information on contracts, the Federal Procurement Data System.

Detailing what federal funds are being spent on is especially important for companies analyzing the federal market. It lowers the barriers to entry for small businesses, reduces the cost of bid preparation, and helps potential bidders identify opportunities to win new business. The best way to link up the existing contracting information found in the government’s current datasets is to export it to a free and open data standard, such as the Open Contracting Data Standard, which covers all stages of the contracting process. You can find further details on how the U.S. government can reduce barriers and costs for businesses entering the federal procurement market here.

Treasury would benefit from working directly with the Small Business Administration Office of Government Contracting to focus on the needs of small businesses across the country. They have already successfully worked together to feed data from individual agencies to Treasury on the Data Broker pilot program.

Now, there is an opportunity for the Small Business Administration to use government-wide data from Treasury to train and engage start-ups and small companies to help them benefit from public deals. For example, when accessing contracting data, small business owners are more likely to want a geographical visualization of the goods or services to be purchased or delivered in their area and a contact person to call, rather than a top-down visualization of all federal spending divided agency-by-agency or by contracts versus grants.

If the DATA Act is expanded to state, local, and tribal governments, the roll-out should complement and learn from the work on public spending already being done at the local level around the country. At last month’s summit, Seth Unger from the Ohio State Treasurer’s office demonstrated the remarkable transparency they are exercising with the Ohio Checkbook. Want to know which companies provide the pizza to the school in your neighborhood? Ohio’s can tell you. This website already shows more transactional-level information on Ohio State spending than is planned for the new federal site USAspending.gov.

There are lots of potential benefits to this collaborative approach. State and local governments across the country have different procurement processes, but if they start using the same data standards, local contractors or grantees could more easily expand across state lines and start getting direct federal work. More competition is beneficial both on the federal and local level.

We run a free helpdesk that’s available to any government entity seeking advice on implementing the Open Contracting Data Standard. We’re already supporting local and municipal governments in other countries, including Canada and Mexico, to help them save money and increase competition in the bidding process.

It’s exciting to provide these suggestions relatively early in the development of the new DATA Act tools, and we’re hopeful they’ll be incorporated into the government’s action plan.

The US has made some positive international commitments to better, more open public contracting data: see here and here. The good news is that work can begin now and in harmony with DATA Act implementation. We are excited to help provide insights to drive this forwards in our home country.

Dodgy deals or disclosure: Towards more transparency in government spending

Is the US Government done with DUNS? How to identify companies who do receive government money